My friend Bob is wise, and he’s a believer, but he rarely gives me any input about Given Life-rated stuff beyond, “There’s a typo in your latest post,” or “Your WordPress theme is broken,” or “Cool.” I love Bob, so when we were having a conversation about something sort of deep and he said, “There’s a blog post in there, maybe even something for Given Life,” I paid attention to what he said. Then, this evening when I was asking God what he wanted to talk about for this message, he brought my Skype-versation with Bob to mind.

Here’s the conversation that I had with Bob on Skype:

Bob: I think Google will always have vulnerabilities because it’s an algorithm. It’s just a matter of figuring out where the weaknesses in it are.
I think there’s a blog post in here somewhere, perhaps even for Given Life, but as humans we always want to be able to quantify stuff down to a formula, no matter how complicated.
Bob: But the things we really struggle with are things that are organic, nature, weather, the human body.
Bob: I think you see this in the Church a lot, people want to reduce God to an algorithm. If I do X, Y happens, just like in Google, but the real world doesn’t work that way.
Jonathan: Yeah. I think people get angry at Google because they personify it. I mean, it’s a company’s website that is run by an algorithm like you say, so humans are pretty far removed from the equation. Bottom line is that if their website is made or broken by Google, that’s a problem with their business- not with Google.
Bob: Pretty much.
Bob: And no matter how much Google changes, they are still trying to make algorithmic tweaks that quanitfy the whole Internet.
Jonathan: Gotta run. Amanda has a meeting at church tonight, and we’re going to order pizza. TTYL!
Bob: Cool, have a great night!

So, you might think, ‘What kind of weirdos sit on Skype, chatting about the world in terms of Google and algorithms?’ Answer: Me and Bob.

My “day job” is as an Internet marketing consultant. I work with a lot of dentists on their websites, and it helps their businesses if someone in their area does a Google search like, ‘Novi tmj dentist’ and they find my client’s website. Of course, everyone wants to be on the first page, so people try to figure out the best way to make their websites show up, and some people are more than willing to trick Google into showing their website if they can find a way to do so. The success of these tricksters (and to a certain degree the success of everyone) hinges completely on Google’s algorithm, the mathematical formulas used to decide which websites to list in Google’s results.

If the tricksters get wind that Google will list their website on the first page if they get a bazillion links, even if those links are from crummy websites, they’ll get a bazillion links. The problem is that Google frequently changes their algorithm. When Google stops counting links from crummy websites, or figures out a new way to identify websites that are gaming the system and penalizes them, as was the case in a recent Google algorithm update, the tricksters get all up in arms because the loophole that they were exploiting was closed.

To be fair, website marketers who are doing their best to play by Google’s rules are sometimes hit as collateral damage too, but Google has always said that if you just make the best website you can, and don’t try to game the system, you’ll do well. That’s what I have tried to focus on, and it has worked out so far for the most part.

I think Bob was speaking with great discernment when he pointed out that a lot of people try to approach God in the same way. In fact, regardless of the religion, most people of faith have some sort of rule set that they operate out of. It feels safer this way.

Think of the last time that someone tried to teach you a card game or board game. If that person wasn’t very good at explaining the rules, the experience was probably pretty frustrating. Just when you think you have a handle on how the game works, you get hit with a new rule. “Oh yeah, I forgot to tell you that if you draw a four on your fourth turn, you lose. Sorry!” A look of bewilderment mixed with anger probably crossed your face.

I’ve had that experience a lot, but I love games, and it’s pretty rare that once I learn how to play the game, I end up deciding never to play it again.

You can think of these lists of rules, the theology of a particular religion, as an algorithm of sorts. Life tends to throw us all sorts of curve balls that we then pass through this set of algorithms, which then tells us…

It doesn’t sound like a lot of fun, but hey, at least there’s direction there!

Without some kind of algorithm, we’d feel lost. Unfortunately, we regularly find that the algorithm we have isn’t working for us. We see flaws in the “programming”, or worse yet, we realize that we’re operating our lives by a list of rules that someone told us were the right ones, but we really have no personal dedication to them.

Then we start searching for a new “god algorithm”. 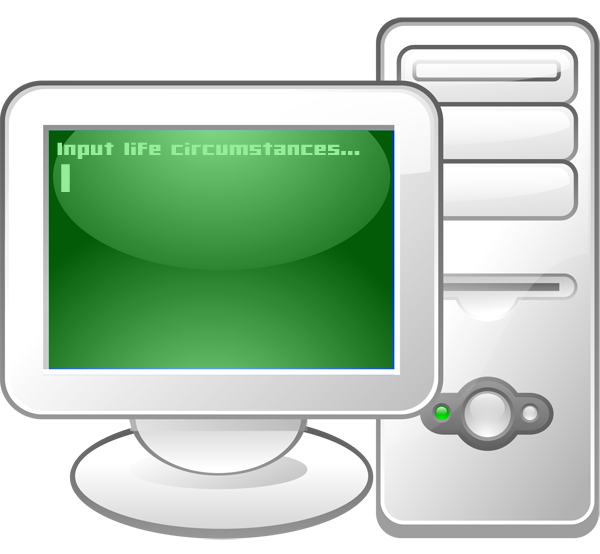 I apologize for the weird PHP/Javascript-ish stuff above. I’m a dork. What I mean by it is this: when you find yourself struggling to find meaning in your god algorithm, that’s a good indication that you’re living out of a religion. Religion gives you a false sense of control in your life. If you live life by checklists, then you probably know what I mean.

That checklist keeps you focused, but we’ve all had days when our checklist of things to do goes out the window with one emergency after another. We end the day feeling harried and feeling as though we didn’t accomplish anything, even though we dealt with those emergencies, because those emergencies weren’t on our precious to-do lists.

We can’t live our lives on paper or by the numbers. Doing so just leaves us empty, lost, struggling, or all of the above.

We don’t generally have a lot of people worshipping Greek gods or Norse gods these days because they’ve been reduced to fables and fairy tales. A meaningful spiritual life can only come from a relationship with a living God, and many people have tried various religions, including various flavors of Christianity, only to find a complete lack of relationship and an overabundance of judgement and empty rules.

Humans can’t adequately fill the void of a living God. If you try to make your boyfriend, fiancee, spouse, your career or whathaveyou into a god for yourself, two things will happen:

Why is a relationship better than an algorithm? A set of rules can’t love you. They can only evaluate situations and give you a heartless answer to a question that may have been the wrong question from the beginning. The one true God can talk back and can provide a meaningful relationship instead of empty religion.

God Is Not A Vending Machine, But He Is A Good Dad

Bob’s original point about people assuming that, “if I do X, Y happens,” may have more to do with people assuming that if they live their lives a certain way, God will bless them, love them, accept them, but if they do the wrong thing, none of that will be true. Thank God, that’s just not the way God operates. Just look at John 3:16:

For God so loved the world, that he gave his only begotten Son, that whosoever believeth in him should not perish, but have everlasting life.

And how about Romans 5?

Romans 5:8-10 KJV But God commendeth his love toward us, in that, while we were yet sinners, Christ died for us. (9) Much more then, being now justified by his blood, we shall be saved from wrath through him. (10) For if, when we were enemies, we were reconciled to God by the death of his Son, much more, being reconciled, we shall be saved by his life.

Nope, we’re good with God no matter what. God’s best plan for our lives just might differ somewhat from what we decide to do with it, but that doesn’t change the fact that we are loved by God, and if we accept Jesus as our Savior, then we’re good for eternity too.

It’s futile to try to find some algorithmic formula that will get us through life. Whether it’s religion, or brute force logic, without a relationship with a living God, we’re eventually left with Ø.

A Parting Thought From Bob…

“People get upset when bad things happen or their prayers aren’t answered the way they want because they think God should be a vending machine, a system where a quarter gets you a soda. While God is consistent, he is also soveriegn and we don’t always know his plan, so sometimes things don’t go quite the way we think they should, but that doesn’t mean that we aren’t in his will.”

You can check out Bob’s blog here.