His Glory Is All Around Us

Have you seen those pictures in email forwards or on the Internet of the 3D chalk drawings done by guys like Julian Beever, Kurt Wenner, and Tracy Lee Stum (not a guy)? They create art in the style of trompe-l’œil where the image seems to have more depth than is really possible in a 2D work of art. 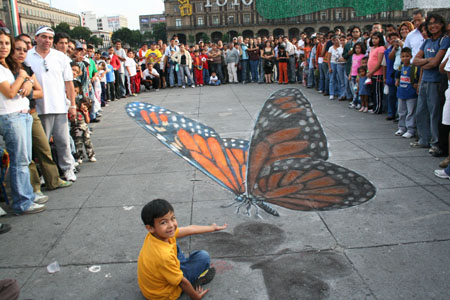 I’ve had days when it seems like the entire world is out to get me. I’ve also had days when it seems like “the world is going to hell in a hand basket” as they say. People can seem like monsters and our lives can feel like a constant battle of futility. In those moments, I check my spirit and realize that I’ve lost the perspective from which God intended me to view the world, the people around me, my life, and even myself.

Isaiah 6:3 says that the whole earth is filled with the Lord’s glory, but in Isaiah 40:5, Isaiah speaks of a time when the glory of the Lord will be revealed to everyone. This would suggest that everyone isn’t seeing it right now. I don’t believe that this is because they aren’t capable of seeing it, but because they aren’t looking for it, and aren’t seeing the world in the right light.

Knowing The Artist, Not Just The Work

The first step to seeing the glory of the Lord in the world around you is to know who you’re looking for. If you don’t know Jesus and you don’t know the relationship that he has with his Father and with us, you’re going to have a hard time recognizing elements of the supernatural in the natural.

Jesus did miracles because he wanted to reveal God’s glory in an unmistakable way. Miracles can and do still happen, but God’s glory isn’t restricted to miracles. It’s sort of like the old Tootsie Roll jingle, “Whatever it is I think I see becomes a Tootsie Roll to me!” If we look at the world from the perspective that God intended for us to have, we’ll see that all of creation is infused with his glory.

When God created the heavens and the earth, he created them from nothing but his own imagination and his words (Genesis 1:1 – the first verse of the Bible). Every living thing was created by God from building blocks that he created. It doesn’t matter whether you believe in evolution or not. If you believe in God and that he is in control, you have to recognize that whether or not evolution was his tool, God created these things from his own mind, and he called them good.

When the fall of humankind happened, this didn’t change what the world was made of. It simply changed how humans interacted with it. God did make Adam and Eve leave Eden, but Eden wasn’t the only part of the Universe that God made. God still surrounds us to this day.

It’s critical that we don’t get out of balance with this idea and decide that everything IS God. After all, despite the fact that the Holy Spirit resides in every Christian, that doesn’t mean that every Christian is a god, but the presence of God does reveal something about the character and nature of a thing.

When we become aware of the presence of God and begin to communicate with the God of the Universe inside of us, we start to be hypersensitive to his movements and his influence. This is the perspective that God intended us to have.

John 14:24-26 “He who does not love Me does not keep My Words, and the Word which you hear is not Mine, but the Father’s who sent Me. (25) I have spoken these things to you, being present with you. (26) But the Comforter, the Holy Spirit whom the Father will send in My name, He shall teach you all things and bring all things to your remembrance, whatever I have said to you.” (NIV)

When we recognize the voice of the Holy Spirit, we begin to hear the way that God causes our surroundings to cry out (Psalm 42:7) to declare the goodness of God. Even in corrupted things and the secular works of humans, we start to see the evidence of God.

Where we used to become angry or offended because of our own “religious sensibilities”, instead we begin to see voids that God longs to fill in people’s lives. Instead of this judgment that we justify by calling it righteous anger, we are filled with compassion and moved to love. We’re touched by the grace of God in our lives and learn that the adage of “there but for the grace of God go I,” applies to more than the poor, injured, or sick.

God Is Good All The Time AND Everywhere

The sidewalk art doesn’t make the sidewalk unusable for people who don’t recognize it for what it is, but passersby don’t have an appreciation for what they are experiencing until they move to the right place. 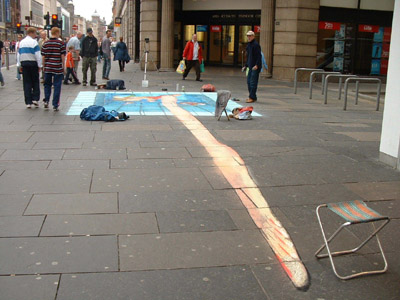 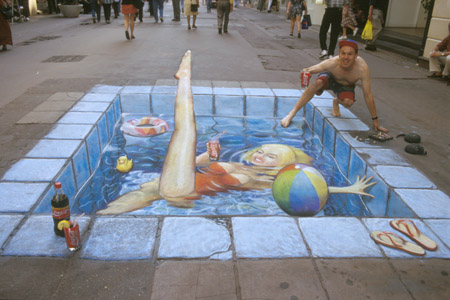 If this message isn’t ringing true for you, I would challenge you to be open to the possibility that you’re simply looking at things with the wrong perspective. Like the chalk drawings on the sidewalk viewed from the wrong perspective, if this message seems distorted or unrealistic, ask the Holy Spirit to speak to your heart and point out if your viewpoint isn’t the one that he intended you to have when it comes to life. Then, allow God to make any adjustments that are needed. I promise you, you’ll like the view. It’s breathtaking.